You are here: Home / About us 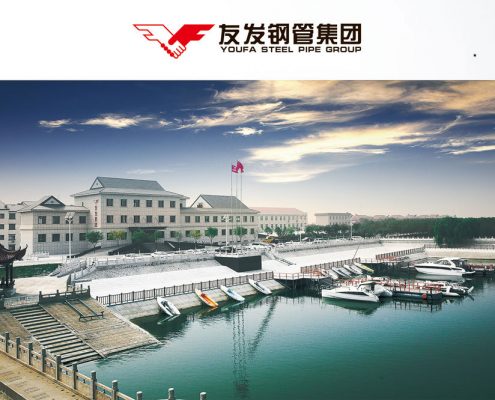 We are also holder of two famous brands: “Youfa” and “Zheng Jin Yuan”. Currently, Youfa Steel Pipe Group has three production bases respectively in Tianjin, Tangshan and Handan, including 9 steel manufacturing subsidiaries, 152 production lines, nearly ten thousand employees, 2 state-recognized laboratories and the only R&D organization in the industry – Tianjin Welded Pipe Technology and Engineering Center, which combines production, education and researches.Our products from the three major production bases are exported and sold in 66 countries and regions in North America, South America, EU, Africa, Southeast Asia, Middle East, Oceania and Hong Kong.Total production of various types of steel pipes in 2015 had broken the records of 10 million tons.If all steel pipes produced by Youfa in a week were connected in series, they would circle the Earth planet. Youfa has taken the championship in Chinese market in terms of production and sales continuously for ten years. It has also been listed as Top 500 Chinese enterprises and manufacturers.

Product quality is of vital importance to the company. By strict quality control at the five links of raw material, production facility, technology, management and testing, Youfa products have been accepted in the first batch of National Exempted Products from Quality Surveillance Inspection. In 2015, Youfa was awarded the title of “Luban Award Honorable Supply” and was rated by China National Association of Metal Material Trade as a 5A enterprise. It is also selected for the most satisfactory enterprises in China by users. The company is awarded the Golden Cup Award, the supreme award of metal product quality rated by China Iron and Steel Association!